The Story of a Rich Man and a Poor Man

Here is my version of an old story that has been around for thousands of years.

“…How unfair life is. The rich have everything but I work like a dog just to get by. I wish the government would redistribute the rich man’s money and let him be poor, like us. He should see how tough it is for the likes of us poor working stiffs…”

So whoosh, the government seizes and confiscates the rich man’s factories, their shopping malls, and makes the rich fellow poor.

The next day, both the poor and the previously rich man start with nothing.

Please pay attention: here comes the “secret” that is no secret. Both penniless, they must forage to find things to eat and survive.

On the first day, the poor man has picked some berries, coconuts. He has even caught a rabbit, leaving a few baby bunnies to die in their rabbit hole.

He has had a very good day. When he has enough, he stops. No surplus. He eats a few berries and sells everything else. He spends $20 at the government market.

Happy, he decides to take his family out to McDonald’s. As a special treat, he buys some Chinese made plastic toys for his kids. Also a state lottery ticket and some useless knick-knack for the house. What a grand night!

His tummy is full and he is happy that the rich guys are now equal to him. He has spent all his money and needs to hunt and gather the following day. And the day after, And the day after that. Soon he says,

Taking the rich people’s money did not help him, did it?

The formerly rich man also finds the same stuff in the forest on day one. With extra effort, a bit more.

He eats only a tiny part of his “harvest”, with his family. He wants to get ahead so they go to bed hungry.

The next day he sells his surplus meager gatherings for $30. Then, he pays $10 for a ride on a boat so he and his family can cross the border and go to another country – with better opportunities.

He offers two unemployed men, also refugees on the boat, spears he made, and fishing nets (he bought for $2). He promises them a safe and secure $9 each per day as his employees to hunt, fish, and gather for him.

The next day in his new country where businessmen/entrepreneurs are encouraged, he takes in and sells $60 worth of stuff.

And guess what? He repeats the process every day.

He captures baby rabbits, feeds them grass, and starts a rabbit raising business. He finds a pond and starts a fish farm. Then, he buys an empty lot for a future factory to turn his fish into dried snacks, and his bunnies into food and fur hats for export.

Finally, he expands into new businesses to produce and market other needed goods.

Results of the Work

The poor man “back home” still keeps doing the same old thing, complaining about his hard life. When he has a good day, he buys some extra treats, toys, veggies, and goes to Jolly Bee for a chicken dinner. His wealth remains the same, at zero.

After some time, the rich man across the river in a free country has saved and invested enough money to open a small factory and start several other business ventures. Including large scale raising of chickens, fish, and more rabbits. Then he opens a store to sell his products at retail prices. Then a small shopping mall.

You can see where this is going, right? In a few years, he is rich again.

The Point of This Tale

These are the “secrets”.

There are always opportunities in free countries, but people there and elsewhere spend most of their time complaining.

In too many cases, people think wealth must be acquired by simply taking it from others and redistributing it to them.

But really, re-distributing wealth just re-distributes the best people to other places. They gravitate to places where private property and privately owned businesses are respected and encouraged.

What happens when governments believe in “equality,” and actually confiscate wealth and the means of production; what then?

They will be running a Marxist-style state. People there are equal, but equal in poverty. Needless to say, the ruling class always lives very well under these regimes. The best course of action for entrepreneurs? Leave if you can!

Bottom line. Live in a country that treats you (as an entrepreneur) well. Be creative. Produce useful products or services. Educate yourself and your wife and children to have saleable skills and expertise.

Then you will be richer than those who have a job (just over broke!) or a subsistence existence in a place where “everybody is equal.” Don’t stay in any jurisdiction where the top tier folks who run things but produce nothing, get all the goodies. 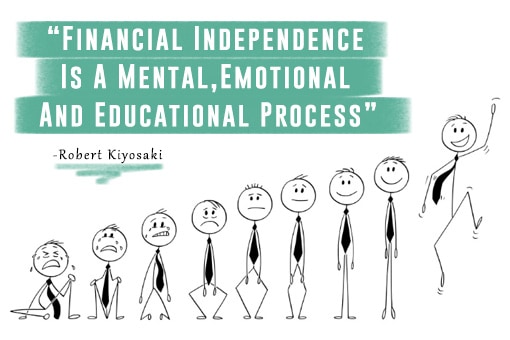 Previous story :How To Become Financially Independent
Next story :Find A Need In A Market And Fill It

How Do Wealthy People Handle the Bill When They Eat Together

I think most readers have a lot of misconceptions about wealthy people and how they act and interact. I myself had such misconceptions from the kind of movies they made in the “old” days: Servants all over the place, flashy cars, huge estates, private Boeing 707s, etc. Sorry, not real. Of course

Leave a comment Cancel
Comments to: What Are the Secrets for Getting Wealthy? Moral Story
Cancel reply